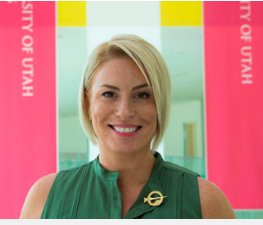 Alysia Klein is the Assistant Professor of the Film and Media Arts Department at the Utah Asia Campus. She is also honored to be the Faculty Director of the Film and Media Arts Learning Abroad program in Genoa, Italy. Klein has taught a number of courses including Film Production, Editing, Intro to Film, Film History, and Dance for the Camera. She has been involved in and has produced a number of films since 2013 and has been credited as writer, director, cinematographer, camera operator, colorist, editor, VFX artist, costume designer and set designer. Professor Klein received her Master of Fine Arts in Film and Media Arts from the University of Utah. In addition to film, Professor Klein is also an accomplished dancer, choreographer, and Screendance producer. She received her Bachelor of Fine Arts in Theater and Dance and between 2003 and 2010, she received numerous outstanding/best choreography awards via national and regional competitions.